I wrote this on the day in which my first baby left for kindergarten...tomorrow she leaves for college. As I re-wrote it here I realized that at the time, in the place and stage we were, sending her away from me for even half a day was oh so significant. Thirteen years later I am stunned at how similar I feel as she leaves once more. Our kids...they grow and change, but a mother's heart, well...its always a mother's heart. 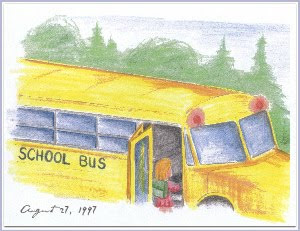 The little girl climbed onto
the big yellow school bus
for the first time today.
As she climbed the large steps with ease
the mother struggled and ached with
each and every step.
When she had taken her first steps,
her mother had clapped and hoorayed,
but then it was into her father's loving
and gentle arms she had walked.
Today she walks into the unknown.
The outside world hovers ever so near,
looms ever so large...
and a
tear
rolled
down
her
face.
Had she done all she had intended
those first five years?
Was the foundation good and strong
and ready to hold up under forces that
may stand ready to tear it down?
Had she looked her in the eye enough?
Had she held her in her arms often...and long?
Had they laughed enough? Learned enough?
Lived carefree enough?
Would the big world be gentle and caring?
Would her heart, mind and body be
protected and nurtured?
As the bus pulled away, the mother did the only thing
she could, she believed in herself. She believed she offered
what she could. She believed in her little girl, believed that
she was strong and would find her own way. And she believed
in God whom she asked to guide her little girl gently and
return her safely at the end of each day.
Father, thank you for being faithful. For growing me as a mom as you have grown my children. Thank you for loving this one even more than I. Thank you for opportunites before her. Thank you for friendships you have already formed, thank you for paths prepared. May she return safely to us often. With a heavy but grateful heart. Amen.
Posted by Sheri Carlstrom at 12:09 PM

Sheri Carlstrom
United States
Just an ordinary mom who was named the 2010 National Young Mother of the Year. Raising four future adults with the man of my dreams as well as my day to day life. Living life intentionally and growing all the time.